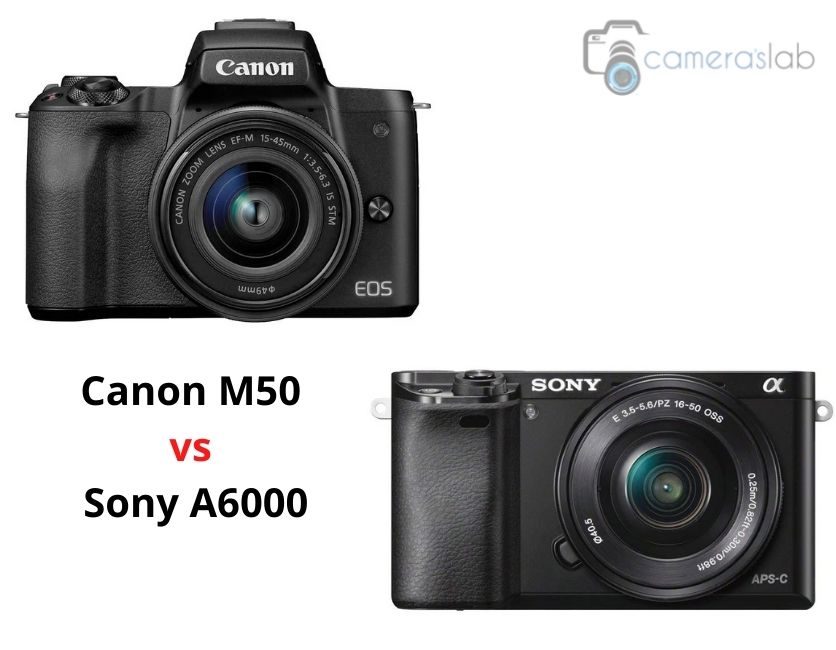 If you can’t decide the best camera between the Canon M50 and Sony A6000, we suggest you choose the Canon M50. Check the below section to know why Canon M50 is best.

Why You Should Choose the Canon M50?

Canon M50 is equipped with these impressive features so that you immerse in photography. But the Sony A6000 cannot offer you these awesome functions, so you can go with the Canon M50.

Differences and Similarities between Canon m50 and Sony a6000

For a  professional photographer, battery life is essential. In this section, the Sony a6000 is one step ahead of Canon m50. At one single charge with a Sony a6000, you can take 420 shots. On the other hand, with Canon m50, you can take 235 pictures. If you are an outdoor photographer, then the Sony a6000 is the perfect camera for you. Both camera batteries are removable and rechargeable. They have a battery level indicator at the time of battery low; you will be notified.

Both cameras have 100% Viewfinder coverage. Sony a6000 viewfinder is situated on the left side of the body. While at Canon, the m50 viewfinder is located at the center of the body. This feature composes the picture correctly when you capture the photo. With full coverage, you may crop the images for the perfect look.

These cameras have a 3 inches screen that can be tilted up and down. At Sony, a6000 screen resolution is 921k dots, and it has a lack of sensitivity.

On the other hand, the Canon m50 has a higher screen resolution. Its touch capability is better than the Sony a6000. Both camera screens can be flip-out and rotate 180 degrees. In this section, Canon m50 gives you excellent service.

The Sony a6000 can record 1080p x 60 fps video. On the other hand, the Sony a6000 also has the same video resolution, but It can also record 4k video at 25p, but its crop is 1.6x, on the sensor. That means that the field of view is decreased when recording 4k video. Another restriction is the autofocus only works in 4k video. The canon comes with a 3.5 input microphone. They come with APS-C sensors with a 24 megapixel. Both devices ISO is 100 to 25600, and Cano m50 can extend the level of 51200.

Canon m50 uses dual cosmos AF with 99 points which are increased to 143 with your selected lenses. These autofocus points cover all maximum lens areas. The canon m50 has a low light sensitivity. There is also eye and face detection. Eye detection only works in S-AF options on both cameras. A phase detection autofocus system is available for videos. The Canon m50 users can get contrast detection when you are recording 4k video.

With Sony a6000, you can add wider function lenses for the E-mount system. In the recent 16-55 mm lens, you can zoom in to 2.8mm. There are many types of wide-range lenses, although some can be pretty large and expensive.

There are only 23 lenses available for the Canon m50 EF-M lens mount. You can add more lenses to both cameras, but there is some problem with the Sony a6000; it can be slower than the other one.

Canon m50 and Sony a6000 can both be counted as your desired camera. But if you choose Canon m50, it can assure you of the efficient and impressive features, including higher ISO, higher resolution, and it also can be operated by touch screen. Now you have decided which camera is suitable for you.

Frequently Question Asked About Canon m50 And Sony a6000.

Canon R6 vs R – See Why Canon R6 is the Best Mirrorless Camera!